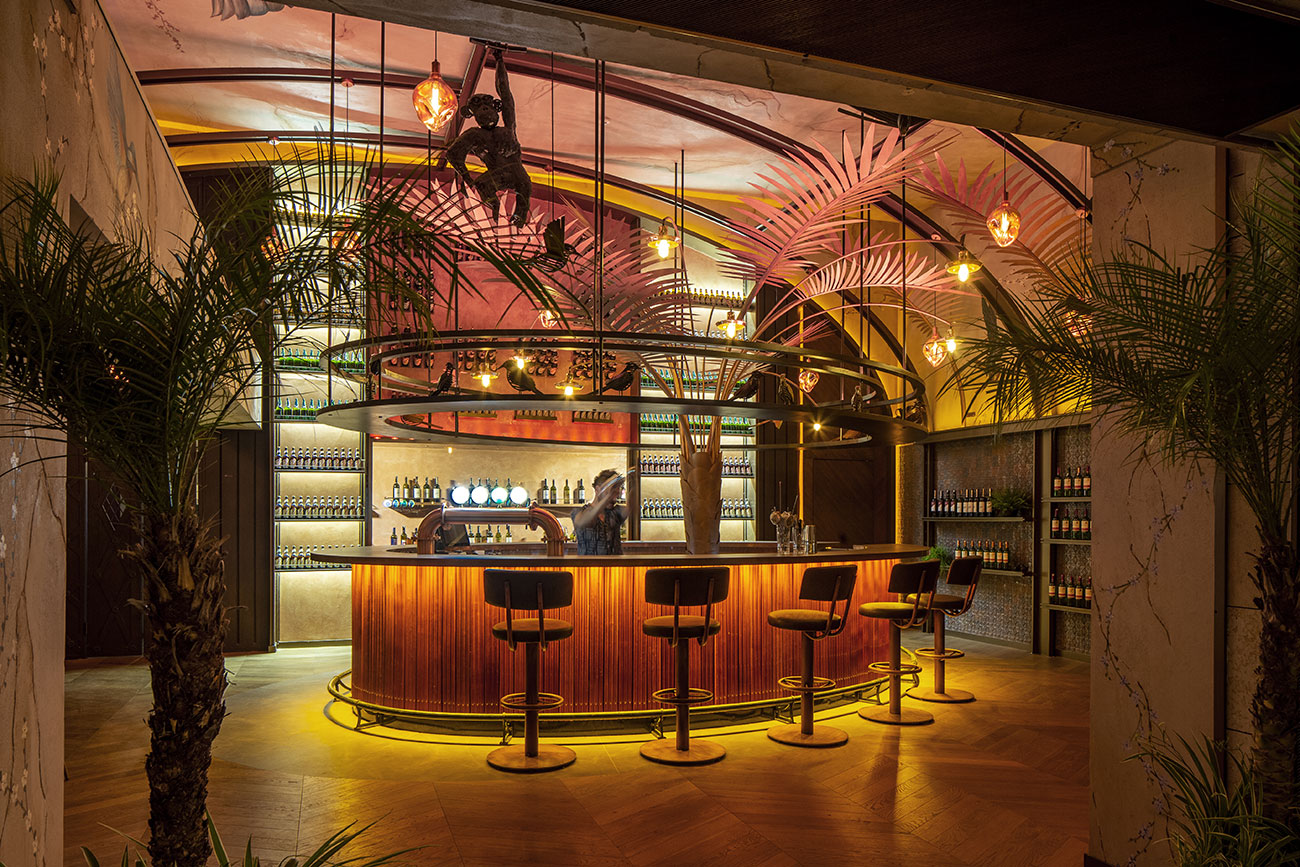 Imagine a cocktail which within each sip, you experience different tastes and smells. Likewise, Paradiso Palms Cocktail Bar is designed considering the harmony of a cocktail despite the diversity of its composing tastes. Enriching the imagination of the visitors, this cocktail bar is located in one of the most sumptuous socializing areas in the Mersin Marina, generating its own wonderland.

While designing this cocktail bar, we designers have combined the local and the timeless elements in the design. The tone-in-tone color palette is obtained by the usage of the natural elements and colors of the surrounding nature. This cocktail bar hosts different elements, furniture and materials coming from all around the world whilst maintaining its local Mediterranean identity. The place is a mixture of arts, crafts and lifestyles generating a timeless place.

Merging the interior and exterior spaces, we have united the whole place to work as a whole. The corridor’s and the terrace’s conjunction offers various alternatives to the space usage. Mersin being one of the cities that grants outdoor usage ability for 8 to 9 months around the year, we have focused on melting the fine line between interior and exterior. Involving the user in the different usage alternatives of the bar enhances the freedom sensation that we targeted while conceiving the design.

The overall design has centered the importance of maintaining a human scale to the space. The continuity of the design strengthens the sensation of the flow and fluidity. Paradiso Palms is a united space of three different areas; the hallway, the bar area and the front deck. All of these areas generate different perspectives by opening up all the facades and uniting the totality of the space. One of the most important spatial regulators that we used in the project is the usage of metallic arcs that assemble the space. The arcs helped the designers to join the hallway and the main bar area together in one sole language.

The core of the project is the bar which hosts the giant metal tree in the middle. The production of cocktails is featured transparently in the space. The “abstract metal tree”, being the central element is present all around the bar area with different kinds of leaves and animals; making an emphasis on the pluralist and uniting environment of the Paradiso Palms. The lighting fixtures around the space, all in the same design language, are making a further emphasis on the identity of the space. Various seating units and types are multiplying the leisure characters of the bar.

Considering the place as a whole, we have settled our arcs in the interior facades and walls of the space without messing with the character of the marina itself yet embracing it. These arches help scaling the ceilings and they lead on to walls enabling different usages. The wooden panels on the walls generate an enriched environment sometimes as decorations but often as decorative art panels, stained glass drawings. One of the other conspicuous elements of this bar is the giant wine library. Located right behind the bar, as the main background which is also refined by various combinations of materials and textures such as metal framed doors, wooden panels and decorative paintings. Behind this wall is the main service space for the bar personnel. An important incentive of Paradiso Palms is to offer an unequalled experience that is such an example within the cocktails opulence.