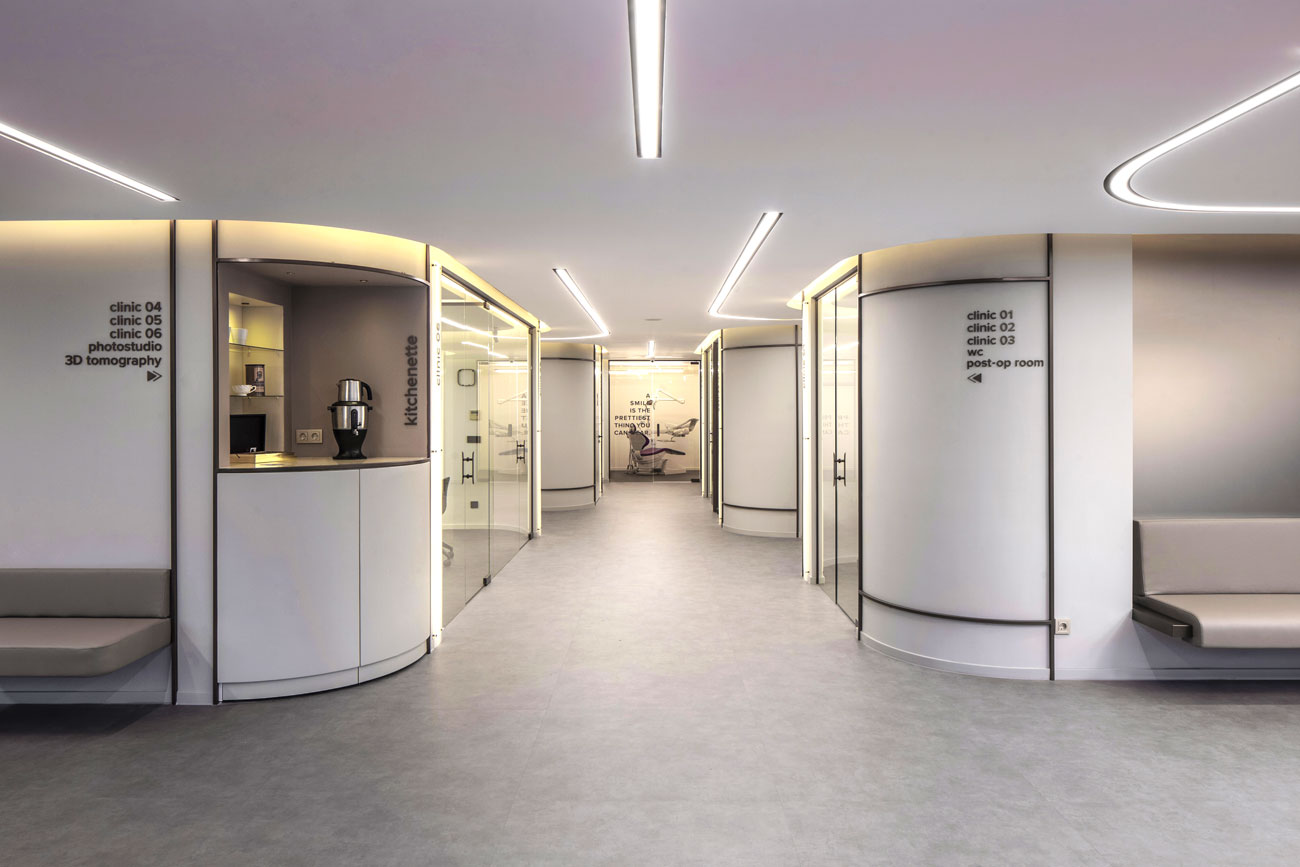 Visitors welcomed via a grand waiting room and greeting area,  they come across a polyclinic where one can feel the intimacy and the transparency of the place. The variety of composition of clinic boxes enrich the perspectives of the visitors circulation. This is a town-like layout where the patients can find their way circulating around the streets. The controlled opacity of the clinic examination rooms, that enables the privacy, are composed with closed service areas that are located in-between them. This composition is enriched by the “clinic box” that is at the core at the end of the corridor giving the connotation of the “health space”.

Clinic 29, in Altunizade, is located in a semi-detached building with 3 facades that are open. This physical quality enables the designers to plan all of the clinic boxes around the façade and have a spatial quality of having clean air and direct sunlight in each examination room. Planning the boxes around the facade also means that they act as a shop window for the clinic.

Locating the boxes and services alongside the interior envelope, the designers have created a composition of spaces with wide corridors. These corridors sometimes have a square-like openings where one can easily access the service units such as panoramic room, toilets, photo shoot room and sterilization.

The concept of the project is built on the idea of breaking the classical approach of having a minimum corridor length and having rooms attached to it. Creating rounded cornered “cabins” that host one or two boxes inside, shapes the masses of the place. Having boxes and service units distinguished, the “blobs” have a pause and in between these blobs the solid walls of the service units are placed.

The polyclinic’s privacy and publicity is controlled by the masses transparency and opacity. Having the examination rooms semi-transparent the patients can feel at ease about the clinical intervention they are about to get. Due to patients' choices the glass partitions can be totally closed or left semi-transparent. The service units of a polyclinic such as panoramic room, post-operation room, photo-studio or toilets are located in between the cabins with an opaque facade. The location of these units are chosen due to the usage and the circulation scenarios of the visitors and clinic staff. One of the privileges that “klinik 29” offers as a polyclinic is that the surgery room is placed at the end of the polyclinic enabling severe patients to have easy access from the second entrance. The surgery room offers a post operation room that has a window which provides the patients companion to be able to observe the operation. This room is planned for the patients to have a post-operation rest before leaving the polyclinic.

The tone in tone color combinations of grey are composed with a touch of warm bronze like colored metal details that create the minimal luxury effect. The frames and lighting fixtures have this touch in order to generate a more profound ambiance. The public and private spaces are distinguished by color changes within the clinic. The interior of the rooms are combined with less grey and more white ambiance that enrich the clinics sterile identity. Spaces such as operation rooms are left mostly white in order to have the sterile emphasis.