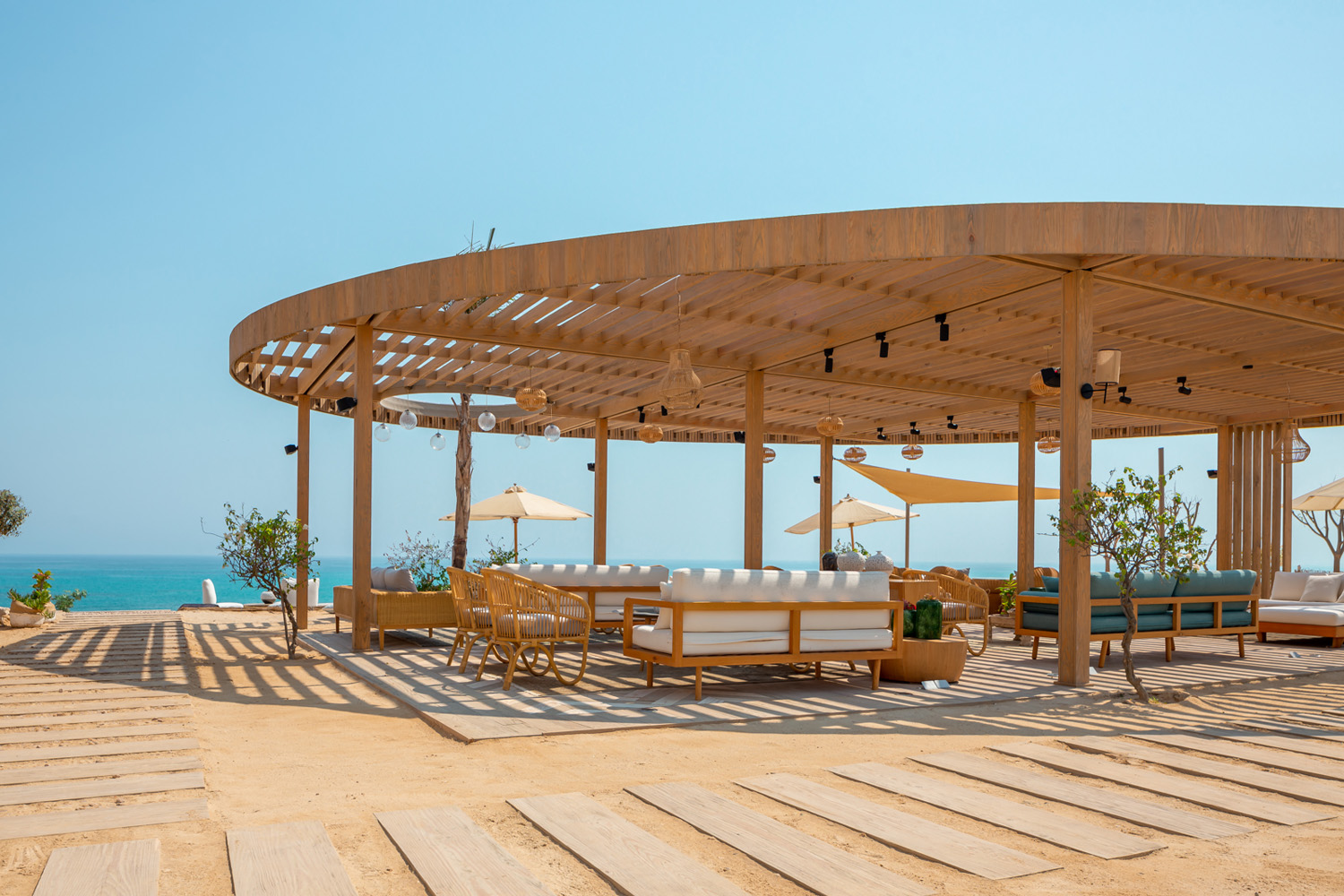 The Barbarossa Beach Club is located in the Egyptian North Coast, at about three hours from the vibrant coastal city of Alexandria. It lodges in one of the most charming Mediterranean sandy beaches. This location is itself a destination for the population that desires to spend a pleasant beach day. Barbarossa is thus a compound that intends to create a particularly memorable beach day for its visitors through the rich program it offers. In addition to the sunbathing zone by the beach, a restaurant, lounge, open-air gym, kids club, concept store, hair salon are included with all the necessary shower and sanitary facilities.

The conceptual journey of Barbarossa has started with the highly diverse brief in an entirely vacant, yet naturally rich plot. The initial challenge has been to shrink the giant scale of nature to a moderate human scale. To do so, the very first axes of the plot have been determined according to this parameter and the local regulations for the primary zoning to be established. The brief stated a particular interest in Greek architecture especially since the restaurant is to serve fine Greek cuisine. Deeper than its distinguished look, the story line poured its sources in Ancient Greek architecture. With a very diverse program in hand, the striking resemblance with the multiple venues of a city has immediately been intercepted. Generally, such typologies represent the city archetype which is essential to forge in order to attain a practical cohesiveness in complete conviviality. The Greek heritage being one of the most affluent resources in science, philosophy and even architecture, it was clearly the root of our proposal.

It is the Hippodamian plan archetype that serves our varied program as it calms the particularities of each space -mostly independent- and unifies them in one geometric order. Basically, The Hippodamian Plan is a city plan that looks like a gridiron. An early example is Tel El-Amarna in Egypt, dating back to the fifteenth century BCE; The idea was introduced in the Greek world by Hippodamus of Miletus, who designed the new port of Athens, Piraeus, in the mid-fifth century BCE. The common location between the current site and the earliest version of this typology has motivated the architects to dig deeper within this ancient architectural scheme. This symbiosis between two prominent cultures sharing a conjunct legendary sea is intended to be obvious in the design of Barbarossa. Following the Hippodamian model, the various masses of the program’s components have been assigned and positioned in the layout according to the nature and compactness of the functions they host.

Subsequent to the spatial zoning, a thorough climate analysis has been conducted to examine the weather conditions of the area as most of the activities are of an outdoor nature. This analysis has enabled the architects to refine the orientation of each of the beach club’s venues. This new parameter resulted in the creation o fa typical micro-city morphology with a central plaza that behaves like a meeting point visually connected to all the venues through the emblematic alleys traversing them. The solid-void ratio, the Hippodamian approach and the dissimilar orientations construct the rather static base of the beach club. At this stage, a unifying element that would join all the compounds and create the identity of Barbarossa is to be established. The choice of a Pergola system as a central architectural element that elevates the beach club represents in fact an architectural signature.

In an attempt to emphasize the natural milieu Barbarossa is implanted in, it was imperative to display organic shapes. Therefore, the tow-level pergolas have been designed corner-free. The first level of pergolas is composed of three independent elliptical pergolas that are ratioed according to the mass they shelter. Basically, each of these is a relaxed reproduction of the rectangular footprint of the masses into a perfect elliptical shaped pergola. On top of these, the main pergola is placed as a second level. Becoming the ultimate union of the underneath space, it is designed by using three perfect circles -in three different sizes- in the areas that are least shaded and are joined with subtle curves to create this boldly unique geometry, authentic to the beach club’s DNA. In addition to the functionality, this disproportionate triquetra intends to serve the scenery depending on the position of each of its circles. By the access point to the beach, the smallest circle has been intentionally used to enhance the beach view and establish a smoother connection with the completely outdoor zone. While the middle-sized circle balances the entrance path and accompanies visitors without entirely obstructing this focal point. Finally comes the third circle being the largest as it covers most of the adjacent paths to the masses underneath as their respective functions oblige. These pergolas then do not only unite the created spaces but offer shade and help the created alleys operate as the actual ancient cities’ alleys offering the user the most optimal thermal comfort even in aggressively warm days. Climate being an extremely crucial parameter, the slats are positioned within the pergolas in a direction that would have them resist the most to heavy winds allowing them to create interesting shade intersections in order to add a certain dynamism to our micro city.

The creation of the desired Greek nostalgia shows tangibly in the materiality of Barbarossa. Favoring a rather raw and natural look, some of the white oak wooden pergolas are clad in a light chalky fabric that crosses the slats to enhance the coverage of the spaces requiring so. The floors too, are either kept bare using sand compression tools to facilitate movement or are covered in different sized and patterned wooden platforms. Being semi outdoor, most of the walls are made of local stones with incredibly rich textures and shades, behaving as indoor and outdoor walls simultaneously depending on where one stands. The overall Greek look is enhanced with a selection of bohemian style furniture to match the dominant palette. In fact, the general atmosphere has been designed to keep the turquoise sea at the center of the attention. This approach allows all the venues to blend in this neutral tone environment giving them each the chance to stand out in a different manner without losing the cohesiveness.

Barbarossa is a fine architectural composition of cultural heritage, geometrical conglomeration, textural variety serving a multifarious program. This delicate amalgamation links the home geography to the destination geography in the most efficient manner possible. Designing the landscape as an example has focused on the locally available vegetations that wouldn’t challenge the fresh water supply. Additionally, handcraftsmanship has been highly encouraged by accessorizing the spaces with unique hand made objects in order to strengthen the local identity. Finally, using the topography as is has been a decision the architects took to show respect to the natural site by avoiding any severe excavations or massive sand displacement. Barbarossa thus invites itself as an unobtrusive architectural oasis in this marvelous natural milieu.